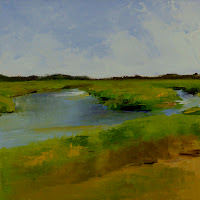 Today I drove down to Providence, RI, to pick up my two paintings from the Royal Gallery.  This gallery hosted the Art League of Rhode Island Holiday Small Works exhibit from  November 17th  to this past Saturday, December 19th.  From day one, this gallery has been a joy to work with.  Their level of professionalism, service and courtesy to both artists and clients is superb.  Even though this exhibit was just up for a month, the gallery hosted three special events to promote the show.  The staff assembled a excellent portfolio of each artist featured that would be a model to emulate for any other show/gallery.  Today  my paintings were waiting for me, each wrapped in crisp white paper and  labeled.  When I unwrapped the work at home I found a card with holiday greetings from the gallery.  Plus the young woman who gave me my paintings said to me, "I just love your work."   I just love their style.  They are the Royal gallery. 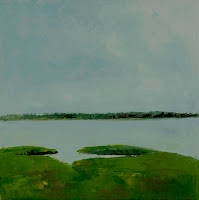 Posted by Martha Wakefield at 2:41 PM No comments: 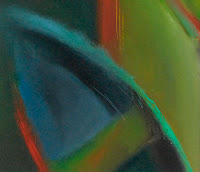 Last night was rough.  I tossed all night while sleeping. This morning the cats looked shipwreaked and I felt like I had been dragged through a turbulent sea. Through all the turmoil in dreamland the name Joan Brown kept surfacing.  Who is Joan Brown you may ask?  Joan Brown orginally Joan Vivien Beatty was a Bay Area Figurative artist from 1955 - 1965 before she changed her style and subject matter.  During those years she studied with Elmer Bishoff, Frank Lobdell, and David Park. Her second marriage was to Manuel Neri.  On becoming a mother she starting painting her life and her work became autobiographical.  "I feel most of my work, if not all of it, is like keeping a diary."

I haven't thought of Joan Brown in months and I am still unsure why her name visited my dreams...but this morning she did make me pull out my book Bay Area Figurative Art 1950-1965 by Caroline A. Jones and reread her history and study her paintings.  One of my favorites of her paintings is called Green Bowl, oil on canvas from 1964.

"I did not want to be "turning out a product," so I began to look at new things, artists I had not looked at before--Morandi, Oriental art,...Ingres.  I made a decision to put away the trowels and the large format.  I stretched a canvas 2 x 3 feet, and I took an egg and a cucumber out of the refrigerator, and I worked on painting only that for one whole year, and I found the freshness and energy I lost."

I feel there is an important message here and I hope that this message will reveal itself in the coming days.  Oh, sweet dreams.
Posted by Martha Wakefield at 2:02 PM No comments:

Tuesday was my last drawing class at the Museum school.  Fourteen weeks later it is all over.  We spent the time eating, drawing, drinking and chatting in a festive holiday spirit. And we did talk about books too.  The latest one is The Red Book and no this is not another book on color and is available for a small sum of $195.00.  The full name is The Red Book of C. G. Jung: Creation of a New Cosmolgy.  The illustrations alone are a fascinating chroncile of the private life of Jung.  He worked on this tome during a 16 year period.  I have yet to see the real McCoy, but am very intrigued to peruse a copy just to look at the pictures.  Currently the book is on display in NYC in a special exhibit at the Rubin Museum of Art until mid-February.  Another good excuse to go to NYC.  So I have a ton of drawings from this class, all of faces that once I thought I could never capture on paper.  And I have yet to purchase a book from this fascinating class of introductions and recommendations but I now have a better education in the diversity and talent of artists to know and study and a decent pile of drawings.
Posted by Martha Wakefield at 12:25 PM No comments: 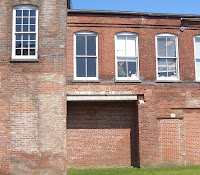 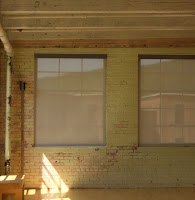 Yesterday, for the first time, I visited a friend's studio.  The studio is in a beautiful old brick building in a nearby town.  Close enough to be geographically desirable yet a fair distance to be away from the home front and all the demands that place holds.  The building is slightly set back from a major street and you would seldom notice it driving by.  Finding it reminds me of the Harry Potter stories where those young wizards crash through the train platform walls and enter into a magical world.  The studio is on the top floor and upon entering I am filled with awe.  Sunlight comes streaming through the large windows. The ceilings are unreachable.  The walls are a mixture of brick and white panels decorated with finished work, art in process and inspiring finds.  This would be heaven for this artist.  We spent two hours that seemed like minutes talking and looking at the work and the tools of the trade.  I could have stayed all day soaking up the spirit of the space, the light, the views from the windows, the quiet and the work.  I left renewed about this path I have chosen.  From there I had to go to Macy's at the Burlington Mall.  From long traffic lines, a overflowing parking lot, aisles crammed with glitzy merchandise that will soon tarnish in appeal and mulitudes of anxious shoppers rushing about-- my morning mood simply vanished.  Oh to be Harry Potter.

Posted by Martha Wakefield at 10:24 AM No comments: 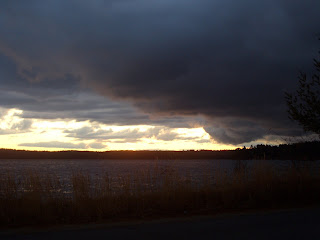 Posted by Martha Wakefield at 7:26 AM No comments: 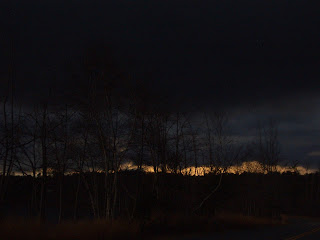 In December there is drama in the evening sky.

Posted by Martha Wakefield at 10:30 AM No comments:

Last night I went to the School of the Museum of Fine Arts to pick up my work from the InsideOut sale.  I was expecting to be lugging all four paintings home so I was surprised (totally) when told two of my watercolors had sold.  While trying to remain somewhat composed-- inside myself  I am jumping up and down with glee.  And with this outward composure I made the mature  response of  "Really?"  A sale of my work can produce such powerful emotions.  First there is a sense of surprise, then awe that leads to excitement/delight blended with feeling extremely honored that my painting has grabbed someone's attention and spoken to them in such a way that they will then invite this work into their home.  And with each sale the element of surprise and delight never diminishes.  A buyer not only empowers an artist by supporting their endeavors in the studio but they also by give us that springboard to jump in "cannonball style" with a big smile and to continue splashing!
Posted by Martha Wakefield at 10:54 AM 1 comment:

I am reading "Wolf Kahn Pastels" by Wolf Kahn.  Besides his amazing talent as a painter he is a gifted writer.  I would highly recommend reading this.  In discussing one's work I like what he has written:  "The moment you know how to do certain things, you should by right stop doing them.  You would be ceasing to search and starting to perform.  You would become your own expert, and your art will become an exercise in self-congratulation....We must try to keep all things in suspension so that the possiblilty of revision or the space for new insights remains ever present."