One reason for me to paint flowers is to learn their names.  I know a rose, a daisy and a iris but beyond that I need a label on the blossom.  I brought some scarlet Gerber daisy to the studio and happily the other white flowers (the name escapes me) were still lively but I could not arranged them in a desirable way.  So instead I reworked a floral painting that had issues and then started a new one based on the photo posted in yesterday's blog.  Normally I do not like working from photos and it shows in this second painting.  My printer was out of color ink and low on black ink so the image printed scratchy.  After lots of errors I decided to photograph the painting and study it on the computer back home.   Viewing a painting using other methods helps to the spot problems now glaring on the computer screen. This one needs help.  For one thing I might have stopped before removing the flower from the space between the stem and the leaves. Plus other areas call for attention.  I did bring the Gerber daisy and the white flowers home, used another vase and somehow this arrangement works for me.   I plan on sketching these this afternoon.  And if anyone knows what the white ones are please tell me. 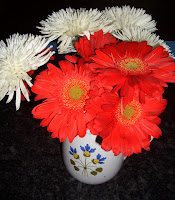 Posted by Martha Wakefield at 11:00 AM No comments: 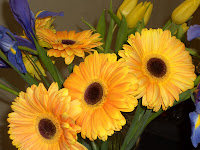 This morning, I have been viewing all the images on my digital camera, which need to be downloaded, sorted and file.  The plan for the day is get to the studio and I am thinking of working on more flower paintings.  Two flower paintings, in watercolor, were recently accepted into a show at the Rhode Island Watercolor Society in Pawtucket, RI.  My goal is to get at least 20 paintings that are suitable for showing.  The goal is set and now I need to get to work.  Wish me luck!
Posted by Martha Wakefield at 8:45 AM No comments: 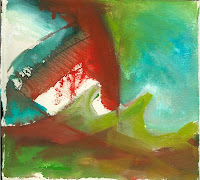 The warm ups continue in watercolors.  The format is still about doing 4 - 6 quick studies sized about 6 x 6 inches on paper using graphite, gesso, a limited palette and each must have a boat and wave motif.  The other day I did take a turn and played with heart shapes (see my recent post Messing with Hearts on Friday, February 12th) in acrylic using the same size range and a limited palette too.  The heart shape is as fun a shape as the wave is to play with.  And playing is a great way for me to warm up for the bigger work to come. 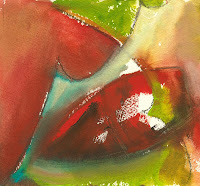 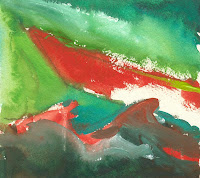 Posted by Martha Wakefield at 8:47 AM No comments: 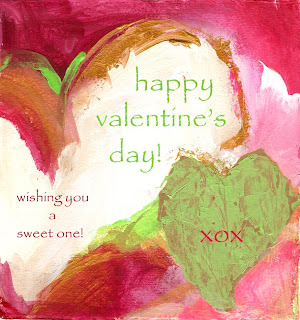 Posted by Martha Wakefield at 6:46 AM No comments:

Did you know that Edwin H. Land who started Polaroid also created the Artist Support Program.  He realized the importance of artists' input to further the enhancements to his products.  Artists such as Rauschenberg, Warhol, Chuck Close and Ansel Adams were provided with equipment and film by Polaroid and then Polaroid, in return, received photographs by these artists and many other talented professionals.  Can you imagine here was a person in Land who started a company and who saw the importance of supporting artists and giving them the means to create, innovate and experiment.   I find this as amazing as the collection of photographs Polaroid has amassed by such artists and that will sadly will be auctioned soon.  For more on this story please check out Carol Vogel's article for the New York Times
Posted by Martha Wakefield at 1:46 PM No comments: 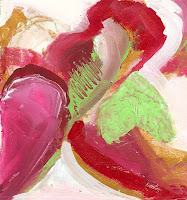 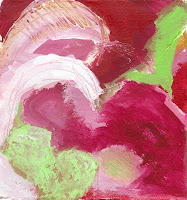 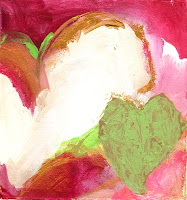 Posted by Martha Wakefield at 4:01 PM No comments: 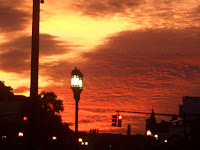 While listening to the superbowl on TV  last night I was perusing the Sunday New York Times.  Enough news that cannot be consumed in one sitting.  I came across the obituary of Geoffrey Burbidge.  It was the headline that caught my attention.  This by Dennis Overbye, he writes "Geoffrey Burbidge, 84, Dies; Traced Life to Stardust."

Dr Burbidge was a fascinating person I would like to have known.  My condolences to his family and friends for their loss.   And the concept "we are stardust" is equally fascinating and quoted from this New York Times' article:

In 1957, in a long, groundbreaking paper in The Reviews of Modern Physics, Dr. Burbidge; his wife, E. Margaret Burbidge; William Fowler of the California Institute of Technology; and Fred Hoyle of Cambridge University — a collaboration noted by their initials B2FH — laid out the way that thermonuclear reactions in stars could slowly seed a universe that was originally pure hydrogen, helium and lithium, the simplest elements in the periodic table, with heavier elements like oxygen, iron, carbon and others from which life is derived.


Stars like the Sun burn hydrogen into helium to generate heat and light for most of their lives, until they run out of fuel and fizzle, or so the story goes. But more massive stars can go on to ignite helium to produce carbon and oxygen and so forth. Eventually the star explodes, tossing the newly minted atoms into space, where they mix with gas and dust and are incorporated into future stars. Successive generations of stars that coalesce from cosmic dust, burn and then explode would thus make the universe ever richer in heavy elements.

Allan Sandage of Carnegie Observatories, an old friend of Dr. Burbidge’s, once explained it this way: “Every one of our chemical elements was once inside a star. The same star. You and I are brothers. We came from the same supernova.”

Or as the singer Joni Mitchell put it, “We are stardust.”
Posted by Martha Wakefield at 6:30 AM No comments: 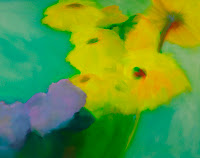 We did not make the MFA yesterday.  Instead it was a day for a long walk in the snowless woods and then to see the movie Broken Embraces by Pedro Almodovar.  A favorite director.  And today it is back to painting flowers.
Posted by Martha Wakefield at 3:15 PM No comments: 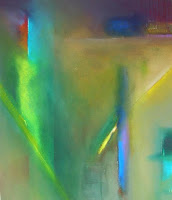 Today I had planned to be viewing the Georgia O'Keeffe: Abstraction exhibit at the Phillips in DC.  But alas, old man winter foiled my plans.  Maybe in the spring I can get to DC to see this show if the snow ever melts there or until May 9th when it closes.  I missed  her show in New York City at the Whitney and could not believe my luck realizing this same show would open today at the Phillips.  When I tried to order tickets on their website it kicked me off.  Greater things were at work to say this was not to be this Saturday's activity.  So here in Massachusetts,  where winter normally shows it many moods for many months it is a quiet seasonal day, no wind, no sun and no flakes falling.  I am thinking maybe the next best thing to do is check out the MFA's exhibit The Secrets of the Tombs 10A, another show I have been wanting to see since it opened last October.  And it is local.  And I have until May 16th.


FRIDAY watercolor 2008
Posted by Martha Wakefield at 7:11 AM No comments: 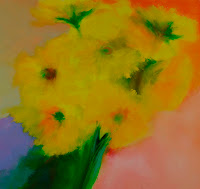 Posted by Martha Wakefield at 7:00 AM No comments: 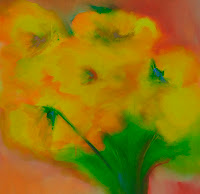 Experimenting painting flowers in watercolors.  This one measures about 20 x 20.
Posted by Martha Wakefield at 6:44 AM No comments: 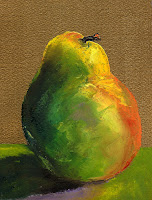 Wow Febuary already.  We made it through January.  Not much of a thaw around here this last week of the month with temperatures hovering near 0 degrees and a cold arctic wind.  But a new month and longer daylight hours to paint and spend in the studio.  Last Monday I worked on this pear and the two previous posting and after that I decided to play with the paint on a panel I had in the studio.  I was inspired by the bouquet of tulips in our kitchen that had each day seem to open their petals and expand their luscious red shapes into the space. 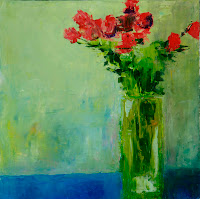 Posted by Martha Wakefield at 6:39 AM No comments: